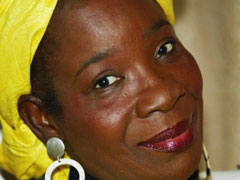 Yes, she is Bob’s widow.

Check out the lyric video!

“The release of ‘One Draw’ in 1981 was during a very significant year for myself and my family,” says Rita Marley. “I never thought it would create the level of global controversy that it did, while still selling over two million copies. With the release 30 years later, amidst all the discussion on the legalization of herb in the States, it shows how relevant and timeless music can be. To all fans and friends: Thank you for standing by me. We are happy to re-release ‘One Draw.’ Hope you enjoy now or better than you did before. Jah Bless you all.”