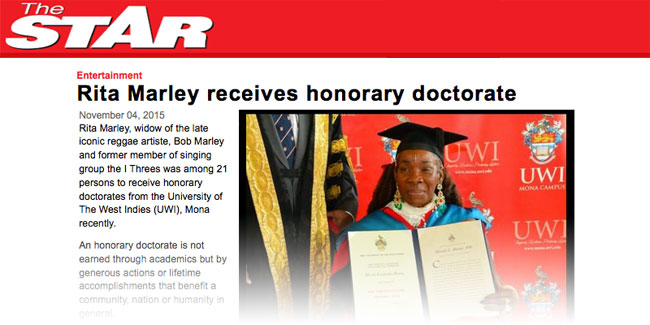 From the Jamaica Star:

Dr Rita Marley poses with her Honorary Doctor of Letters Degree from the UWI, Mona

Rita Marley, widow of the late iconic reggae artiste, Bob Marley and former member of singing group the I Threes was among 21 persons to receive honorary doctorates from the University of The West Indies (UWI), Mona recently.

An honorary doctorate is not earned through academics but by generous actions or lifetime accomplishments that benefit a community, nation or humanity in general.

The Marley matriarch received an honorary Doctor of Letters from the institution on Tuesday November 3, 2015.

This is earned in recognition of achievement in the humanities or original contribution to the creative arts.

The creative arts is an area in which UWI believes that Rita has made a lasting impact.

“Rita Marley continues to make invaluable contributions to the Jamaican music industry as singer, producer, performer and entrepreneur. She has built a globally recognised empire with members of the Marley family, and, by extension, the spread and reach of Brand Jamaica as a related and intertwined category,” a statement from UWI confirmed.