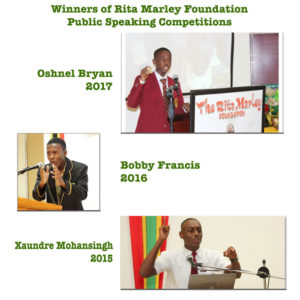 Following our competition, the eloquent Bobby Francis, entered and won other oratory events. Bobby is Vice President of the Student Council at York Castle High School and an honour roll student. He is also a lay preacher at his church. It is there he developed oratory skills.

A masterful orator, Xaundre Mohansingh is studying medicine at the University of the West Indies, Mona, Jamaica. He also serves as President of Debate & Oratorical Society at Elsa Leo-Rhynie Hall (Towers Hall). Xaundre is very active in Advent Fellowship and is the Cell Group Leader for Towers Hall.