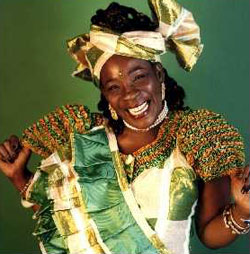 Alfarita Constania Anderson was born on July 25, 1946 to parents Cynthia “Beda” Jarett and Leroy Anderson. She is affectionately called “Rita” an abbreviated version of her birth name Alfarita. During Rita Anderson’s early childhood her parents separated and she was adopted by her Aunt Viola a well-respected seamstress. They lived in Trench Town Kingston.

From a tender age Rita Anderson aspired to be a nurse and attended the Bethesda School of Practical nursing. However, God had destined for Rita Anderson to be the “Queen of Reggae” and assigned her a mission to bless the world with song. As a child Rita Anderson often entertained her father Leroy “Papa Roy” Anderson with song while he worked. In her childhood Rita Anderson also competed on a program called “Lanamans Children’s hour” hosted by a musical veteran called Vere John. Rita Anderson emerged the winner with a magnificent rendition of “Our Father- Lord’s Prayer by Mario Lanza.” A song Rita Anderson’s aunt taught her. Little Rita Anderson always delighted her Aunty Viola with that song while she sewed.

She formed the musical trio The Soulettes. During Rita Anderson’s teenage years she made the acquaintance of a local Trench Town youth, Robert Nesta Marley (Bob Marley) and love, faith and music became their bond. On Feb 10, 1966 they were married and their lives became forever entwined.

Internationally, the name Marley is synonymous with reggae music and the culture of Jamaica. It is no coincidence that the talented young Rita Anderson was destined to become an integral part of the musical Marley family. Bob Marley is the King of Reggae and his wife Mrs. Rita Marley provided him with vocal support as a member of the I-Threes. Mrs. Rita Marley also forged an extraordinary career as a solo artist.

As the Matriarch of the Marley Family, Mrs. Rita Marley wears many hats and has been instrumental in the initiation and completion of great works internationally, regionally and locally. In 1986, she had the vision and wisdom to transform Bob Marley’s house at 56 Hope Road in Kingston, Jamaica into the Bob Marley Museum. It is in her capacity as Founder and Chairperson of the Robert Marley Foundation; the Bob Marley Museum; the Bob Marley Trust; the Bob Marley Group of Companies and the Rita Marley Foundation – that Mrs. Rita Marley continues to make manifest her commitment to the works of her husband Bob Marley; her children [including the GRAMMY Award winning Ziggy Marley & the Melody Makers]; and her people – by fulfilling her mission to enlighten, educate and entertain through her philanthropy and music. With her purchase of the former Federal Records at Marcus Garvey Drive and subsequent relocation of Tuff Gong International to this new address – this organization is now a leading record manufacturing and distribution company in Jamaica, the Caribbean and the world.

“The aged be protected, the infants nourished and cared for.” These are indeed the words that inspire the vision that drives and propels Mrs. Rita Marley – and which have sustained her status as a spirited force and an ambassador of love and of reggae music.

Mrs. Rita Marley is a member of the Ethiopian Orthodox Church. Her baptismal name is Ganette Mariam. It means Paradise of St. Mary. Mrs. Rita Marley is head of the Ethiopian Orthodox Church Building Fund. Its main project is the erecting of a Cathedral at their Maxfield Avenue address, where she has also established the Berhame Selassie Home for the Aged.

Mrs. Rita Marley has adopted 35 children in Ethiopia, and works assiduously to impact their lives in a practical and positive manner. Her donation of arable land to the Rastafarian Nyabinghi group in St. Toolies, Clarendon has encouraged their self-supporting ideology. Mrs. Rita Marley also gives continuous support of food, clothing and medical supplies to people of poor communities, including a Home for the Aged in St. Mary.

As a benefactor of countless humanitarian causes her works extend outside of Jamaica and has reached as far as Africa. In year 2000 Mrs. Rita Marley was enstooled as Nana Afua Adobea (Queen of Development) in Konkonkuru, Ghana. A patron of the Konkonuru Methodist Schools in the Aburi Mountains of Accra Ghana, Nana, as she is affectionately called, assisted over 200 children of the Konkonuru Methodist Schools. She is always soliciting assistance for the children and the Konkonuru community. Nana Rita has successfully spearheaded the repairs to the main road as well as the provision of bore holes to supply safe and clean water. Nana Rita has built the Alpha & Omega Home for the Aged and a clinic to serve residents of Konkonuru.

Mrs. Rita Marley’s musical career has seen the production of four successful albums: Who feels It Knows It, Harambe, the 1992 GRAMMY nominated album We Must Carry On, and Spectacle For Tribuffalos, as well as the classic reggae album Beginning, with the I-Threes. Her sizzling 1982 hit “One Draw” created shockwaves around the world and was a massive bestseller. Over two million copies sold. The song made music history as the first reggae single to top the Billboard Disco Charts. It was re-released in April 2014 under Shanachie Records.

Mrs. Rita Marley’s live performance has been captured on the Marley Magic videotape as a memento of the 1996 concert, which broke attendance records for the annual Summer Stage Concert in Central Park, New York.

Her most recent album Sunshine after Rain features tracks produced by her son Stephen Marley, Sly and Robbie, Grub “Asley” Cooper, Denis Charles and Wyclef Jean. Mrs. Rita Marley has extensively toured the Caribbean, Africa, Japan, Canada, the Americas, South Pacific, Australia, the United Kingdom and Europe. Her appearance with the I-Threes, the Wailers and her children The Melody Makers – for a performance with the Fugees at the 1997 GRAMMY Awards marked the first time that any reggae artiste performed for a GRAMMY audience. In 2003 Mrs. Rita Marley toured the South Pacific islands of Tahiti and Noumea. This undisputed Queen of Reggae has performed at the Reggae All Stars concert in Nassau, Bahamas.

Mrs. Rita Marley O.D. (Queen of Reggae) upholds the artistic and cultural standards of reggae and continues to take it to new heights. Her music reflects the versatility and diversity of reggae through the smooth blends of Gospel, Rhythm & Blues, Jazz and Soca. About the message in her music, this Queen Mother declares: “The message is joy, loving and living together, no fighting, no war. Reggae is the heartbeat of a person. It’s the people’s music. Everywhere you go you get the same response from black and white alike,”…and as sung on the Harambe album “Wouldn’t it be nice to have my kind of war, where the weapons would be love and peace and harmony?”

Her autobiography No Woman No Cry published by Hyperion, was launched in Europe and Africa and is available worldwide. It is printed in both English and Spanish. Translations will be printed in Swahili, French and German. This long awaited book has received rave reviews and there is a movie being discussed. No Woman No Cry is available locally at the gift shop located at the Bob Marley Museum and is distributed by Novelty Trading Company Limited.

Mrs. Rita Marley has been the driving force behind keeping the Legacy of her husband Bob Marley alive and one major activity is the Bob Marley Birthday Celebration each year. In 2005, Mrs. Rita Marley staged celebrations both in Jamaica and Africa under the theme “Africa Unite.” That year, the festivities took place in Ethiopia. In 2006, the celebration was held in Ghana. The event was held in South Africa in 2007 and in Jamaica from 2008 to present.

Mrs. Rita Marley is a proud, vibrant, confident Jamaican woman who is thankful for her many blessings and continues to give back to the two societies she loves dearly, Jamaica and Africa.

Mrs. Rita Marley has twelve children, over sixty grandchildren and one great grandchild.